Rainbow Moonstone, in spite of what the name suggests, is in fact not a type of moonstone, but actually a white labradorite. This stone emanates a great desire for life and overwhelming joy. Its energy is more powerful than any other moonstone, embodying many excellent qualities, including the feminine wisdom and Goddess energy of the waxing and full Moon.

These beautiful crystals reflect within them the magical healing qualities of the vibrations of the moon. This stone’s energy can help in balancing both feminine and masculine vibrations within the body. For women, it can assist to recognise and embrace their innate personal power. Within men, its energy may influence the brain, and aid in becoming more emotionally balanced.

Rainbow Moonstone possesses a strong vibrational energy that brings light into the spiritual and mental life. This may also help in guiding you through some hard psychic circumstances. This stone is a very effective transformational stone, and simply working with it for a short amount of time can encourage one to take on new opportunities.

This crystal is a powerful ally in helping maintain mental clarity throughout the day and assists in shielding your aura from negative energy. By helping keep your mind clear, you’ll notice the passive ability of Moonstones in general to raise one’s awareness, intuitive and intellectual levels.

The rainbow moonstone is available all around the world, with important deposits in the countries of Sri Lanka, India, Australia, Madagascar, Russia, Mexico, USA and Canada, amongst others.

Rainbow Moonstone have been found in pieces dating back over 2000 years, both in Oriental countries and in jewellery from the Roman empire, where they believed were stones born from solidified rays of the moon.

During the Art Nouveau period in the early 20th century, moonstone became popular with artists and goldsmiths for creating jewellery.

Rainbow Moonstone is a variety of Labradorite that exhibits a shiny reflective quality and rainbows throughout, reminding people of the way the moon looks.

The distinctive appearance and coloration of this stone is due to the way it is formed. There are two different kinds of feldspar that are mixed together, and as the mineral cools and arrange themselves in an alternating layer. The layers strew light, which then leads to the existence of glowing from within the crystal.

When meditating with this stone, we recommend using other transformative stones alongside of it such as Labradorite, Bumblebee Jasper, Aragonite, or Moldavite. All of these stones are extremely powerful and will push you to take a path in life full of your truest desires. These stones combined with Rainbow Moonstone help one openly express themselves and what they most yearn for in this world. Once one realises they can create their own destiny, only then will they become unstoppable. 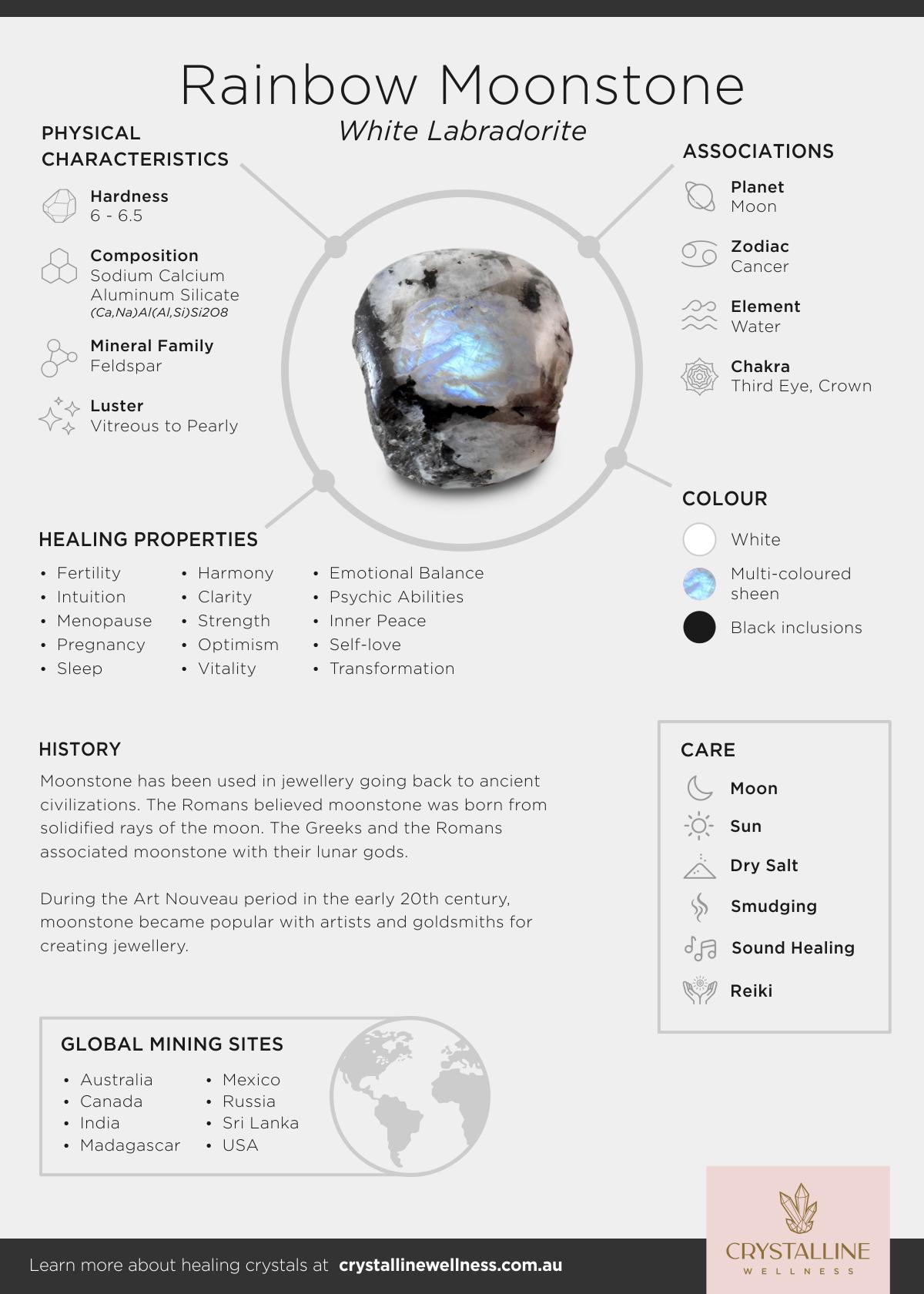